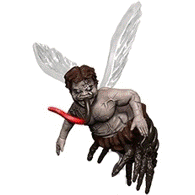 This childlike blasphemy conjoins the features of a plump human infant and a gigantic, gore-fattened fly. A zebub is immune to fire and poison, while also being resistant to acid and cold. A zebub has the unique ability to record all that it sees and pass its visions on to another creature. By remaining in physical contact with a willing creature, it can replay up to a day's worth of witnessed events, transfer that information at a rate of 1 hour of imagery per action (1 combat round). The target receives in a flash of information, without sound or other sensory information. After relaying its findings, the zebub cannot replay transfer those visions again to anyone. A zebub cannot transfer its visions to an unwilling creature or nor can the visions be used as an attack, no matter how horrific the events might have been. In combat, the devil will bite, which carries with it an infectious disease, known as Devil Chills. A victim bit must roll a Resilience preservation save at a DC:14. Failure indicates a d4 penalty on all Body saves; however, the symptoms do not begin until 2d12 hours later. Without a holy intervention, the infection lasts until the victim successfully makes three saves (one roll per day).