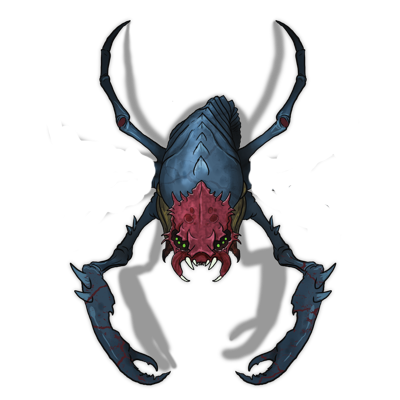 These are four-legged insectoids around 8 inches long. They offer no direct combat threat. However, they attempt to reproduce by implanting eggs into living humanoid hosts while sleeping. The victim is permitted a body preservation save (DC 11) as if this were poison. If failing the save, the new beetle grows for d4+4 days, after which the pain sets in as the larva attempts to gnaw its way out of the host. This inflicts 1 body point of damage per hour. No natural healing occurs during the infestation, but magical healing will work. The bug keeps eating until the host reaches zero, where in the new insect emerges in an “Alien-style” fashion. Remove Disease will kill the larva. Also, if it cannot eat its way out within 12 hours, the bug dies and is passed from the host about 8 hours later. However, there is still no natural healing occurs until the bug has been passed. An assassin beetle is almost always a solitary creature.