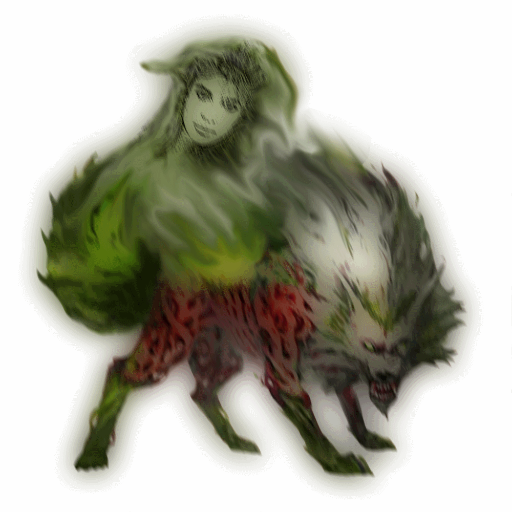 The natural form of this dybbuk is that of a horse-sized canine with prehensile hand-like structures for paws; however, the bōakai are frequent shapeshifters, making them difficult to detect. Rumors are the fiends use their guile to lure innocents for the reason of devouring them. While they can change into nearly any shape of roughly the same size, they seem to prefer to rule over goblinoid races. Perhaps because even if being found out, their power will retain as respect, worship and fear to remain in power over their small reign. When among goblin races, a bōakai will tend to appear as a very large version of the tribe. This preference does not prevent them from taking on the form of a strong human Adonis type to lure females to be consumed. However, bōakai are more cautious in such societies. These evil beings possess a keen intelligence easily equal to that of most humanish beings, and possess innate magical abilities that allow them to float and leap at will as an action, and charm prey or open a dimension door one time between dawn to dawn. When in a different form, they cannot be detected differently by divination magic costly fewer than 6 points. They can also make mental attacks to insinuate themselves into the minds of their prey and flood them with thoughts of utterly hopeless despair. When attacking physically, they perform a bite/claw multi-attack. As for the mental attack, it is an attack on a target in sight, forcing a Will save (DC:15). If failing, it will reduce the victim's Spirit score by 1d6. This method can be performed once every 3d6 minutes; thus, it is usually done clandestinely. If making the save, the victim will know it has been attacked; however, location and existence of the bōakai is not automatically known. However, as this doubles as its method of “consuming” a victim the fiend may extend this practice for days or weeks before completely causing the death of one’s spirit, somewhat treating the meal to act like livestock. Thus, the time to eat an innocent would vary by hunger and circumstance.