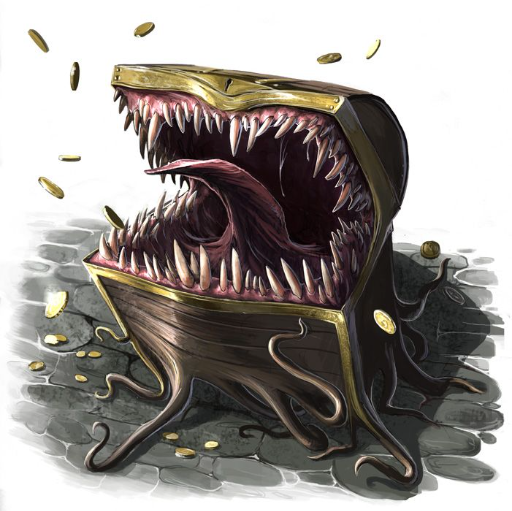 Mimics are shapeshifting predators able to take on the form of inanimate objects to lure creatures to their doom. In dungeons, these cunning creatures most often take the form of doors and chests, having learned that such forms attract a steady stream of prey. Mimics can alter their outward texture to resemble wood, stone, and other basic materials, and they have evolved to assume the appearance of objects that other creatures are likely to come into contact with. A mimic in its altered form is nearly unrecognizable until potential prey blunders into its reach, whereupon the monster sprouts pseudopods and attacks. While the mimic remains motionless, it is indistinguishable from an ordinary object. When it changes shape, a mimic excretes an adhesive that helps it seize prey and weapons that touch it. The adhesive is absorbed when the mimic assumes its amorphous form and on parts the mimic uses to move itself. The mimic adheres to anything that touches it. A Huge or smaller creature adhered to the mimic is also grappled by it (escape Strength DC:13 competition).