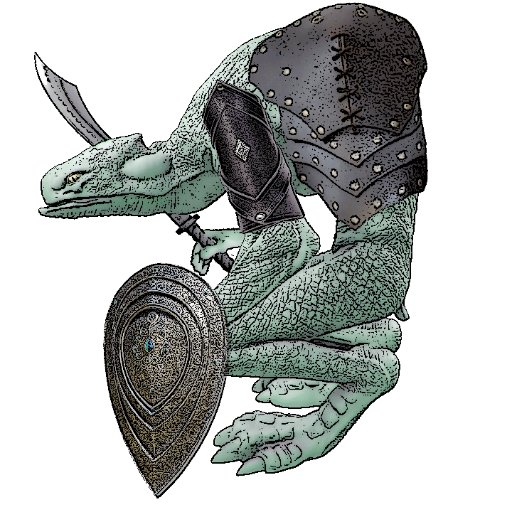 This mago-engineered race are augmented versions of the yaun-ti lizardfolk. After centuries of racial mutations various methods, the yaun-ti finally established an magical engineering process to grow an enslaved soldier class of their kind, which are known as the velikzmijj, which means “big snake” in the lizardfolk tongue. There are specific phenotype markers as well as lifesong patterns that must be identified before the subject reaches the age of seven within a subject to be a potential for being transformed. Due to a deal that a group of isolated yaun-ti made with Saren Shen, an evil elfin woman with the secrets of cloning, along with some unknown fiend, the island of yaun-ti were the first to begin building a superior army. These creatures are conditioned heavily to follow orders from their command structure. Some who have investigated this sub-species believe they may not have free will. Moreover, they appear to be preprogrammed to acquire specific combat skills as they gain karma. The basic foot soldier will have melee fighting, ranged fighting, a fighting style, shield-use, and parry; after that most gain a series of martial arts skills for hand-to-hand encounters. While they are not at their top mental capacity, this does not mean they are mindless or stupid. Many have a keen battlefield intelligence; however, this limitation does prevent the ability to acquire both sorcery and diving accord. Their standard posture places the top of their heads just a little over six feet tall; however, their bulk, weight, and form places them in the Large size category.