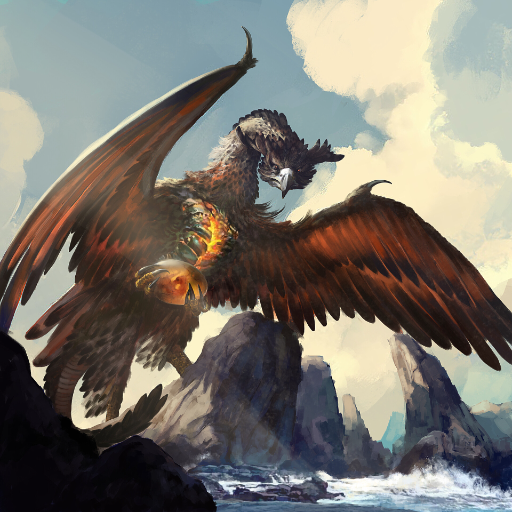 A roc is a powerful mutant creature of enormous size. It looks much like an eagle with a 60-foot wingspan. However, if is much more than just a giant bird. It has a natural armor and special protections from physical harm. It is resistant to non-magical edged weapons and resistant to any piercing weapon (even magical ones). In combat, the roc can attack separate opponents, similar to having spinning moves, enabling it to attack one target with its beak and another with its talons. Although it could use both against one enemy if desired. Further, the talons can grapple, and when doing so, if forces the defender's competition to be rolled with disadvantage.
While walking on the ground, the roc is slow, moving only at a rate of 20 feet; however, when taking flight, it can move at 120 feet. Further, it tries to attack in flight rather than being on the ground, as such any flee attacks made on it will only have 1 die in the attack. Further, when attacking in flight it will become available to be hit by melee on initiatives of 3 prior and after its attack action. Before and after this, it will be out of range via flight.
Finally, the roc has a rapport with spirits of the air, weather and bodies of water. This effectively permits the roc to have knowledge like a commune with earth invocation; however, it is limited to information at or above the surface. These creatures are also immune to fear.