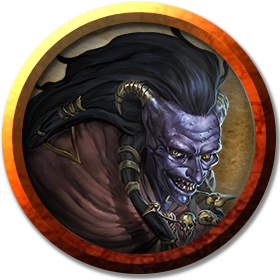 The corpse-thin frame of this horrifying, sharp-fanged crone may seem weak, but she is a power hag. The night hag cannot be harmed by normal weapons, requiring a silvered one to inflict damage. The hag magically polymorphs into a Small or Medium female humanoid, or back into her true form. She can do so as an action. Her statistics are the same in each form. Any equipment she is wearing or carrying isn’t transformed. She reverts to her true form if she dies. Further, if she is in possession of a heartstone, the once per night she can enter the border ethereal plane. While there she can magically touch a humanish and atavistoid being and ruin the effects of his or her long rest. Magical protections can block her touch. This hag never sleeps and is immune to such spell effects. The night hag also is at advantage when rolling saves against spells and magical effects.