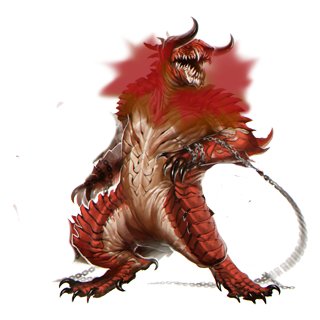 The dracotaur began as a demi-dragon from a minotaur, but the species somehow survived, albeit encounters are quite rare. A dracotaur sometimes will leave its species to lead a circle of minotaur. However, when among its own kind, they live rumbas of six to ten. A dracotaur stands nine feet tall with a horned serpent head, covered in scales of a rust color with hair growing from underneath them in its mane region. It is a biped beast with the broad torso of a humanoid. Moreover, it has talons with which it strikes on its attack with 3d20; however, it may employ weapons as well. Like most hybrids, a dracotaur will automatically succeed on any preservation save for Mind or Spirit. Dracotaurs have darkvision in addition to normal sight.